2020 Summary of Foliar Fungicide Applications on Corn in Iowa

As in years past, these trials were done to provide data to farmers to help determine if a foliar fungicide was necessary. Our objectives were 1) assess the effect of timing of application of fungicides on disease, 2) evaluate the yield response of hybrid corn to foliar fungicide application, and 3) discern differences, if any, between fungicide products.

Six products at various application timings were evaluated (Table 1). Fungicides were applied at growth stage V12 and/or R1 based on the company’s suggestions. No surfactant was included in applications made at V12. 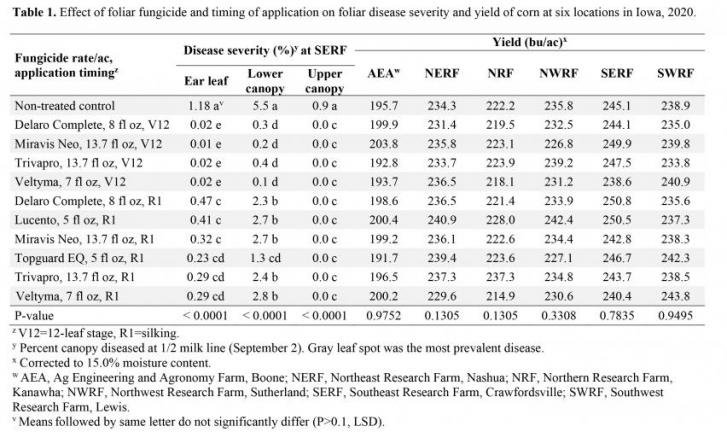 Effect of product and timing on foliar disease

Effect of product and timing on yield

To limit resistance developing to fungicide chemistries, reserve fungicide applications for fields that are more likely to have disease, such as those planted to susceptible hybrids, low-lying fields where morning fogs often occur, or fields with a history of disease. Follow local extension pathologists and agronomists on social media to stay informed on diseases prevalent in your area, the risk of disease, and the need for a fungicide application.

Thank you to the farm managers and staff at each location who managed the trial and applied the fungicides. Thanks to Jyotsna Acharya for analysis of the data.